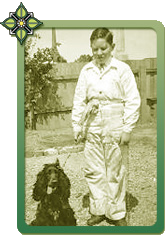 Gus Allen was five when his family moved into the St Kilda Cemetery lodge in 1941.

His father ran the service station at the corner of Hotham Street and Dandenong Road, so the position was very convenient. Gus lived there until he left home in 1961 and remembers the cemetery as an idyllic place. This is his story:

“The whole place was like living in a beautiful garden. Spring was fantastic.There were tall shady trees, some of them oaks and some of them fruit trees such as pears and apples. Boxing Day -my birthday – was an occasion to collect apricots. The wasteland you see today has been created to save on maintenance. We had no fear of the departed. My mother always said that the people inside the walls couldn’t hurt you, it was those outside you had to worry about. My mother also claimed to be on good terms with a ghost in the lodge. She called him Charlie, but I never noticed him. Anyway he was quite harmless.”

The Cemetery was full of interest for a curious boy. Gus recalls: 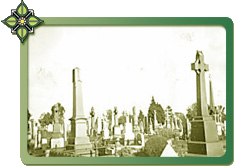 “One day I went to the servo after school and was very excited when Dad told me a pig had fallen off a truck and had run into the cemetery. I went looking for it on my bike. It was huge. The police didn’t know what to do with it. My father did. He called his mate George Campbell who happened to be a butcher. We ate pork for many months. 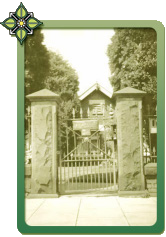 “We had a cocky for ten years that lived in the laundry out the back. He would climb the trellis to the top of the fence and follow funeral processions cheering up the mourners with “hello, luv” and “hello dear”.

Obe Pedersen, the curator who lived in the office building, was a gentle soul. One day he came to see my father: “Arthur, I’m in terrible trouble” . A rat had fallen into a freshly dug grave. It couldn’t get out and a funeral was due. Obe wasn’t capable of killing anything. My father said no problem. He went off with his .22 rifle. The mourners never knew there had once been another body in that grave.

“One night my father had a tiff with my mother as married couples do and went for a walk to cool off. Mum sent me to look for him because he’d had a few drinks. I found him asleep by the workmen’s shed in a wooden wheelbarrow and wheeled him home.” 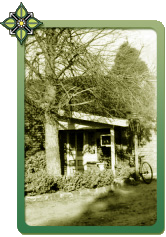 “It was a very sociable place. My father was a JP and people including police would call at all hours for affidavits and bail papers etc. Family and friends gathered on Sundays and of course we were also friends with Obe and the other cemetery staff. We built a very good bar in the huge lounge of the lodge.  “I was a member of the army reserve (CMF) in Chapel Street and the bar was a gathering point after practice. They thought it was a great laugh.

“Denominations were very strong then. There were strict rules about who got buried where and everything was done according to your religion. Very serious business.”

There were some big funerals. I remember a brigadier was being buried. Two busloads of soldiers marched up and down in rehearsal for a day and a half. Very entertaining. 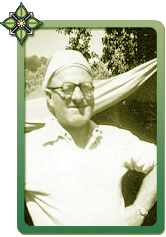 Romance bloomed in the cemetery. When Gus was 16, a couple rented part of the cemetery office building with their 16-year-old daughter Barbara. Gus and Barbara became childhood sweethearts and were later married for a period. Sadly the magnificent lodge with its bell tower was eventually pulled down and replaced by a lawn cemetery.

“My parents loved the place so much they are buried in the lawn cemetery on the site of their former bedroom. The pine tree nearby is a Christmas tree that my father brought home one year and then left outside the lodge in a wooden tub. Eventually it took root and grew. That was more than half a century ago.

During 2001, Gus attended tours conducted by the Friends of St Kilda Cemetery to point out his parents’grave and to entertain visitors with his tale of the boy who shared his playground with the last resting-place of 50,000 people.