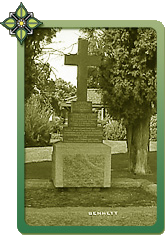 “Passed to a higher life.” Inscription on the grave of James Bennett.

James Bennett was born in St Kilda and is one of its most famous sons. He became an Australian national hero in an era when the imagination of the public worldwide was gripped by the wondrous feats of flying machines and their crews.

During World War One Bennett joined the Australian Imperial Forces as a mechanic. He later earned the Meritorious Service Medal after serving in the Australian Flying Corps in Egypt and Sinai. After the War, he gained the Air Force Medal when, with another mechanic W.H. Shiers, he assisted Captain Ross Smith on the first ever flight from Cairo to Calcutta. In 1919 the Australian Government offered a £10,000 reward for the first aviator to fly from England to Australia in 30 days. With Bennett and Shiers as their mechanics, Ross and Keith Smith claimed the prize when they set down in Darwin arousing Australian jubilation and worldwide acclaim. Ross Smith said publicly that the achievement was largely due to the two mechanics. Bennett was promoted to lieutenant and a bar added to his Air force medal.

In 1922 the Smith brothers, Shiers and Bennett began preparations for an around the world flight. 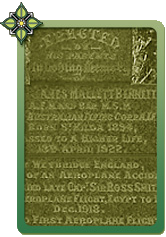 Disaster struck on the 13th April when and Bennett Ross Smith were killed on a test flight. Their bodies were brought back to Australia. On the 19th June, after lying in state in Parliament House, Bennett was laid to rest in the centre of St Kilda Cemetery watched by one of the largest crowd ever to attend a burial there. He was 28 years old. A monument in his honour stands in St Kilda’s O’Donnell Gardens near Luna Park.