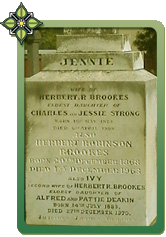 The lives of Ivy and Herbert Brookes spanned a century of civic life covering the period before and after Federation. Shelf space is rarely used as a measure of a marriage. However the huge collection of papers that occupies 12.5 metres of shelf space (143 boxes) in the National Library indicates that the Brookes’ marriage was an enduring partnership of joint and separate interests. The papers cover politics, music, Melbourne society, patronage, empire, business and family history.

Herbert Brookes’ contribution to federation was as a supporter and a public servant. He served a range of public service roles in the new Federal Government including that of the Commonwealth Commissioner General. He was probably Alfred Deakin’s closest friend and regarded him as a confidante, spiritual advisor and mentor.

After a highly successful career in the mining and pastoral industries, Brookes became a prominent spokesman for secondary industry and pastoral affairs. His broad range of public activities reflected his artistic and business interests. They included Chairmanship of the Chamber of Commerce, First World War committees including the Munitions committee, Commonwealth Board of Trade, Tariff Board, Commissioner General to the United States, foundation member of the ABC, League of United Nations, English Speaking Union, University of Melbourne. He was associated with the Foundation of the Commonwealth Liberal Party and the Peoples Liberal Party and edited the publication The Liberal from 1911 to 1914. He was an active promoter of Victorian orchestral music. His life moved from radical to conservative leanings. In his 20’s he was an active Christian socialist, a mine manager and reformer, a campaigner for trade unions. He had strong views on sexual equality. In his 50’s he was a national leader of anti-Catholic Protestantism, and an ‘anti-labour eminence’. Like Deakin he was a devout admirer of the British Empire.

Brookes’ father, William, had arrived in Victoria in 1852 at 18 years of age. He started as a bullock driver and amassed a fortune through mining ventures, pastoral properties and companies such as Australian Paper Mills. Herbert Brookes’ first marriage, to Jenny Strong, ended tragically with her death in 1899. Alfred Deakin responded to Brookes’ extreme distress with a friendship that deepened over time and invited him to accompany the family to England.

In 1905 Brookes married Deakin’s eldest daughter Ivy. Their marriage was a highly successful partnership based on many public and social activities. Their home “Winwick” in Walsh Street, South Yarra was a cultural gathering point for politicians, artists, musicians and visiting dignitaries. Their partnership was sustained by a belief in simplicity of lifestyle, and that money was to be used for education, travel, art and other people.

Ivy Brookes was musically gifted and crowned her conservatorium career with an Ormond scholarship for singing. Her activities over more than half a century spanned musical, women’s and welfare fields. Her public roles included the womens section of the Liberal Party, League of Nations, National and International Councils of Women, Empire Defence League, Melbourne Symphony Orchestra, Womens Hospital Board for half a century, faculty of Music at Melbourne University, Philharmonic Society, Lady Northcote Orchestral Trust Fund, International Club of Victoria and President of the Housewives Association.

Both Ivy and Herbert Brookes are buried in St Kilda Cemetery. For many people their lives inspired and demonstrated the virtues of model citizens in a new nation.