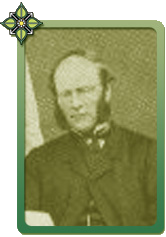 In March 2001 a plaque was unveiled by the mayor of the City of Port Phillip on a previously unmarked grave in St Kilda Cemetery. It commemorated Benjamin Cowderoy, St Kilda’s first Chairman, elected to the position on 11 March 1857 at the Council’s first meeting. Cowderoy later designed St Kilda Council’s crest and selected its motto and his portrait is the first in the long line of mayoral paintings hanging in a corridor of the Town Hall.

Not only was Cowderoy’s grave forgotten until recently but also his campaign for a over a quarter of a century to unite the states of Australia into a single union based on a common trade and customs agreement. Cowderoy believed that the negotiation of a commercial treaty, not the writing of a constitution, was the most practical step towards nationhood. Like many others he believed that the federation movement would never attain sufficient public support to be successful. 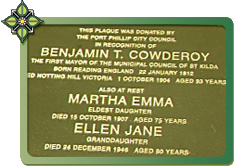 During Cowderoy’s campaign, trade was the single most divisive issue in Australia. The states acted like different countries with divisive tariffs or taxes enforcing wasteful competition. Protection and free trade were rival philosophies that men espoused with religious fervour. Free traders had a vision of international harmony bringing prosperity and preventing wars (see Murray Smith). Protectionists foresaw a great and secure nation built on strong and diverse industries protected from foreign competition.

Customs posts on borders created tensions by enforcing border taxes. Travellers were frisked and their baggage searched. Male customs officers searched female travelers. War-like threats were made by the States in border disputes. An inter-colonial conference in 1870 was held but failed to agree on a common tariff and customs union.

By 1880 the states had given up. Not Cowderoy however, who was the most persistent advocate of a customs union in Australia. As secretary of the Melbourne Chamber of Commerce for 25 years, Cowderoy fought relentlessly and determinedly for this goal. He negotiated with chambers in the other colonies, organised conferences and lobbied governments. Ultimately he was unsuccessful. The merchants from around Australia could not reach agreement on their common interests. In the end it was not the practical men of business but the “poets, politicians and patriots” that succeeded in achieving union through the means of federation.

In his lifetime, Cowderoy became the living embodiment of Melbourne commerce. His business partners included Frederick Sargood also buried in St Kilda Cemetery. Cowderoy Street in St Kilda bears his name. On his retirement as secretary, the Chamber presented his portrait in oils to the National Gallery.