‘To those who watched its (Federation’s) inner workings and lived the life of devotion to it day by day, its actual accomplishment must always appear to have been secured by a series of miracles’. – Alfred Deakin 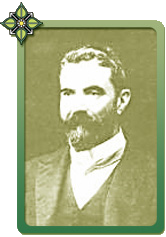 Alfred Deakin was a man of extraordinary gifts. His use of these gifts has justly earned him the claim as the father of federation in Victoria. What other man could be Australia’s prime minister three times and also be a spiritualist, poet, journalist, theosophist and man of letters? Perhaps his greatest gift was his ability to set his ego aside and persuade others to passionate causes, earning him the nickname “Affable Alf” .

And few causes were dearer to Deakin than federation. In the age of enlightenment at the turn of a new century he, like many others, was gripped by a sense of destiny and untold possibilities for a new society in a new country. Darwin had discovered evolution in nature. Perhaps human society could also evolve to a higher level.

In the 1870s and 80s Deakin, and other leaders like George Turner and Isaac Isaacs, (later to be the first Australian-born governor-general) were part of a new generation of Australian-born ‘colonials’; who had nationalist aspirations to develop genuine Australian institutions, culture and identity. They rejected English class elitism and snobbery (Holroyd). 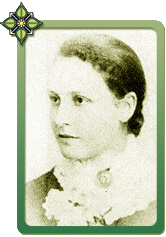 Deakin originally trained as a lawyer but was uninterested and received few briefs. In 1878 David Syme employed him as a journalist on The Age. (Deakin’s second assignment was reporting the loss of the Loch Ard – a tragic shipwreck off the south coast of Victoria in 1878 ). Syme was an immensely influential man who became a close friend and patron of the young Deakin and assisted his political career.

In 1879 Deakin made his maiden speech in the Victorian Parliament at the age of 23. After a precocious speech on constitutional reform, he immediately resigned his seat! The cause was his ethical concern about a vote-counting dispute. He was re-elected a year later.

In 1882 Deakin married Pattie Browne the daughter of a wealthy spiritualist. During his courtship he wrote thousands of lines of poems and many songs for her. Despite her parent’s disapproval of the marriage, it was close and enduring until his death in 1919. They had three daughters – Ivy (1883), Stella (1885) and Vera (1891).

The family lived in St Kilda in 1884 while their family home ‘Llanarth’ was being built in South Yarra.In 1882, Deakin was a master of consensus and persuasion, but he could also act with speed and purpose. He attended the 1891 Convention and argued passionately for democratic and constitutional reform. But when the bill lapsed in the colonial parliaments he went to the people to re-establish the federation momentum, becoming chairman of the Federation League in Victoria. When a campaign by The Agethreatened the constitution bill of the 1897-8 convention, Deakin rallied the ANA to campaign across the State for a ‘Yes’ vote. When the Government hesitated in its support he marshalled colleagues to threaten breaking with the cabinet: the Premier George Turner changed his mind and the cabinet campaigned for federation (Turner).

Sent to London to negotiate the Constitution Bill, Deakin and most of his delegation refused to accept amendments by the colonial secretary Joseph Chamberlain. He believed that a constitution democratically endorsed by referendum by the Australian people should not be denied. Chamberlain backed down. In 1900 Deakin helped secure Edmund Barton’s election as the Commonwealth’s first prime minister by opposing the governor-general’s first choice of Sir William John Lyne.

He was attorney-general in the Barton ministry implementing federal institutions such as the High Court and arbitration. He was subsequently prime minister three times between 1903 and 1913 and implemented a far-reaching nation-building agenda. He had already served as chief secretary in Victoria and was responsible for progressive legislation including a pioneering factories and shops act and a far-reaching irrigation bill. The father of federation was also the father of irrigation. His first initiative, at age 25, was a private members bill: the Protection of Animals Bill.

History has been less kind in regard to other aspects of Deakin’s career. In Victoria he oversaw the Half-Caste Act – a death knell for the Aboriginal Station in Healesville. While acting premier and co-leader of Victoria he oversaw a boom which ended in a disastrous depression (see Munro, Sawer). He and his father lost large sums of money and he subsequently refused all cabinet positions to concentrate on federation. Perhaps federation was an escape from the extreme suffering of the many Victorians who had foolishly trusted in the protection of the parliament. 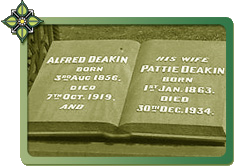 King O’Malley reflected that Deakin “was one of the kindest men that ever walked the earth”- an odd attribute for a politician. On his first trip to London he refused a knighthood and returned half his expense allowance to the Treasury. He horrified his colleagues in London when as prime minister he preferred a “cheap lodging house and a nine-penny chop” . Even his opponents acknowledged his courtesy and integrity. He was known to all yet an intensely private man who retreated to his books, writing and gardening, protected by his womenfolk who considered him as unworldly.

Deakin’s grave reflects his modesty. It is plain in the extreme with a book sculpture as the only ornament. At the funeral a Union Jack and a simple wreath of gum leaves was all that adorned his coffin. Herbert Brookes, his most intimate confidante (as well as son-in-law and fellow federalist) is also buried in the same cemetery. Family members, including his father William (who was an accountant to Cobb and Co.) are in an adjoining grave.