” She was neatly dressed in black, with a clean white apron, and covering her head was a white grannies’cap with the ruffles forming a frame around the wrinkled face, that usually beamed with good nature. ” – from Cooper’s History of St Kilda 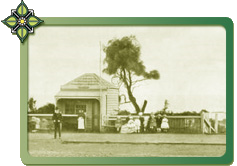 One of the best known characters in St Kilda in the 1860s and 70s was an elderly widow known to thousands of parents and children as ‘Granny’. In The History of St Kilda 1840 -1930, John Cooper records that she began selling oranges and sweets from a basket under a gum tree in 1863 on the Upper Esplanade in front of the Royal Hotel. She was estimated then to be at least seventy years of age.

James Mooney, the hotel owner, took a liking to her and built her a ‘cupboard’ attached to the tree for shelter. In 1864 a severe storm destroyed the tree as well as damaging the hotel and local sea baths. Compassionate residents with the assistance of the council held a concert in the civic hall to raise funds to build a stall known to the public as Granny’s shop where thousands of children over the years begged a penny from their parents to buy sweets. In 1872 ‘Granny’ found herself too frail to continue and arrangements were made for her placement in the Melbourne Benevolent Asylum where she apparently died a few months later. The stall was taken down despite other potential occupants as the Council said (according to Cooper): “No, it was Granny’s stall. Granny had gone, her stall would go too”

Lack of information about ‘Granny’ makes it difficult to know where she is buried. She had been married twice, thus the two possible surnames according to the daughter of Captain Kenny who owned the local sea baths. Two female Andersons were buried in St Kilda Cemetery around 1872.

The public support for Granny was an expression of the reality that charity, not social welfare, was the only relief for those left destitute as a result of old age, unemployment, injury, disability or poverty. The citizenship and nation building ideals of Federation led to the introduction of the old age pension by the Federal Government in 1908. It was double the rate paid at that time to pensioners in Britain.