‘His work is the bank and his hobby is also the bank.’

You could bank your money on John Sawers who was a leading figure in the financial and commercial world of Australia for 40 years. He was superintendent of the Bank of Australasia during Australia’s largest financial crash that began in Melbourne in 1893 and quickly spread to other states. A depression ensued but Sawer’s judgement and nerve brought his bank through relatively unscathed and helped restore stability. The crash itself almost derailed federation. The constitution endorsed by the convention of 1891 was forgotten while states struggled with their economic problems.

Sawers himself was a strong supporter of the federation movement and in 1904-5 he served as president of the general council of the Chamber of Commerce of the Commonwealth of Australia. Sawers’ first job was in the Scottish railways but in 1864 he migrated to Sydney and by May 1865 was a clerk in the Sydney branch of the Bank of Australasia. By 1871 he was a teller in Castlemaine, then acting accountant. He spent time working up the ladder in New Zealand (where he married Elizabeth Buchanan in 1878) and London and by 1887 was assistant superintendent in Melbourne.

Four months later fate intervened in the form of the famous Windsor railway accident that took the life of E.S. Parkes – the superintendent of the bank. Sawers assumed the role for the next 18 years until shortly before his own death.

Sawers had taken the helm during an extraordinary land boom. The wealth created by the gold strikes had caused land prices to skyrocket. Vast amounts of money poured into the colony from Scottish and English investors who often invested in protectionist and speculative schemes. Profits from Victoria’s protectionist tariffs had been used to increase the number of factories from 400 to 3000 by 1891. Public debt expanded from £54 million in 1875 to £198 million in 1892. In one year alone (1888) the circulation of money in Melbourne increased 84 per cent. Many of Victoria’s banks and building societies were later found to have loaned out depositors’ money on speculative or illegal schemes and there was little if any regulation by government. Scores of wealthy “land boomers”, many of them parliamentarians, eventually went bankrupt, faced court or fled overseas (Munro). 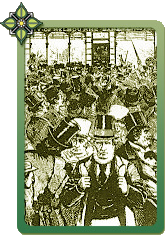 Concerned by a run on bank deposits the Victorian cabinet met secretly on Sunday 30 April 1893 and declared a five day bank holiday. The excited train driver delivering the signed proclamation from the Governor to the printers smashed through railway gates on his way to Flinders Street. The next morning the public awoke to discover their entire banking system had apparently broken down. Thousands thronged in a panic outside the banks where their money was locked up. ‘Collins Street was a sea of milling faces’.

Sawers refused to obey the Government’s moratorium and the Bank of Australasia opened its doors. ‘Men literally fought with each other to get in.’ By the afternoon it became apparent the bank was going to keep on paying out for as long as required and the panic eased. Sir Archibald Michie Q.C., twice attorney general (Michie) publicly praised Sawers for his actions.

Sawers was popular with his staff and the public with a reputation as a firm and capable administrator. He had been prudent during the boom, accepting deposits equal to the banks paid up capital and reserves, enabling them to meet all demands. Three strong banks, the Union, the Bank of Australasia and the Bank of NSW held 44 per cent of the total cash reserves of Australia and escaped the crash virtually unscathed. Dozens of other financial institutions collapsed taking most of their depositors’ money with them.

His other roles included chairman of the Associated Banks of Victoria, the Bankers Institute of Australia and President of the Melbourne Club. He retired from the bank due to ill health in 1905 but missed it greatly and was plotting a possible return when he died on 1 July 1906 at his home ‘Craigellachie’ in Inkerman Street, St Kilda.